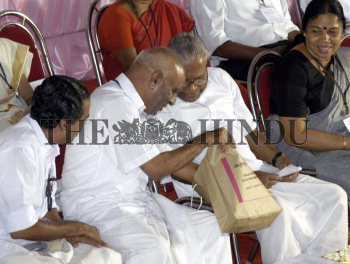 Caption : THIRUVANANATHAPUARM, 16/05/2007: Chief Minister V.S. Achuthanandan is all curiosity as Minister for Local Self Government Paloli Mohammed Kutty shows him a kit of simple products made by women's self help groups, at a function organised in Thiruvananthapuram on May 16, 2007 in connection with the nineth anniversary of the launching of the Kudumbasree Project. Law Minister M. Vijayakumar and Health Minister P.K. Sreemathy are also seen. Photo: C. Ratheesh kumar