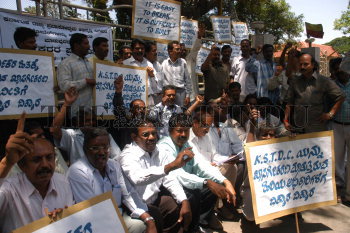 Caption : BANGALORE,16/05/2007: Karnataka State Toursim Development Corporation (KSTDC) employees from the state staging a protest against privatisation of its profit making units across the state, in front of KSTDC office in Bangalore on May 16, 2007. Around 1000 members are being employed, including contract employees in KSTDC. Photo: K. Murali Kumar.