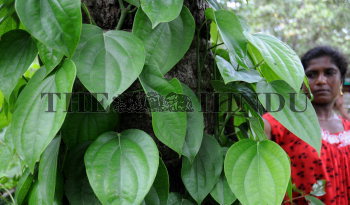 Caption : KOCHI, 22/05/2011: Going Green: A resident of the Pokalappara Kadar tribal colony, in the organic pepper farm. Twenty six families of the colony have embarked on organic farming in their area which comes under the Vazhachal Forest Division, Thrissur District. During the last monsoon 4,000 Karimunda pepper vines were planted in around three hectare area by the tribesmen under an initiative of the State Forest Department. Photo: H. Vibhu