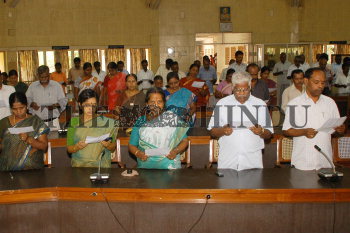 Caption : DINDIGUL, 20/05/2011: Government staff taking Anti-Terrorism Day pledge at the District Collectorate premises in Dindigul on May 20, 2011. The death anniversary of the former Prime Minister Rajiv Gandhi is observed as Anti-Terrorism Day. Though the leaders anniversary falls only on May 21, the pledge was taken one day in ahead since May 21 is Saturday. Photo:G.Karthikeyan