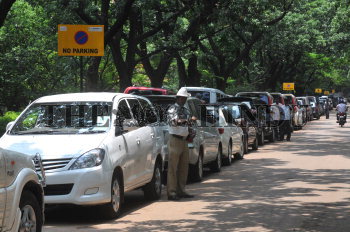 Caption : BANGALORE, 20/03/2011:Cars were parked on Cubbon Park road during the protest demonstration by Bharatiya Janata Party against Governor at M.G. Statue in Bangalore on May 20, 2011. Photo:V.Sreenivasa Murthy