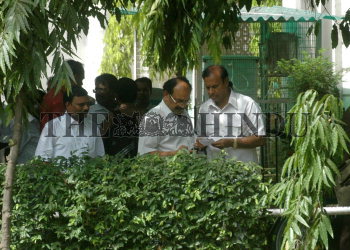 Caption : NEW DELHI, 20/05/2011: Former Union Minister T.R.Balu and others at Patiala House Court after the Judgement of Judicial custody to DMK MP Kanimozhi in 2G Scam, in New Delhi on May 20,2011. Photo:Sandeep Saxena