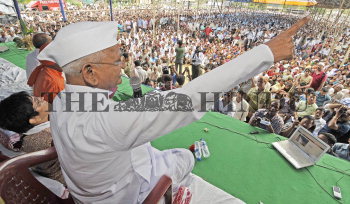 Caption : GUWAHTI?20-05-2011 Noted Gandhian and anti-corruption crusader Anna Hazare is addressing a public rally against corruption in Guwahati on Friday, May 20, 2011. The rally was organized by Krishak Mukti Sangram Samiti (KMSS) to fight against corruption against Congress Government in Assam state. Anna Hazare was also accompanied by RTI activists Akhil Gogoi, Arvind Kejriwal, Swami Agnivesh and Kiran Bedi. All of them are closely involved with the ongoing movement against corruption and Hazare?s indefinite fast in support of the Jan Lokpal Bill. PHOTO: RITU_RAJ_KONWAR