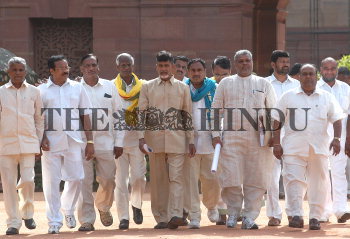 Caption : NEW DELHI, 15/05/2007: N. Chandrababu Naidu, Telugu Desam Party (TDP) leader, along with his party delegation coming out after meeting the President, at Rashtrapati Bhavan, in New Delhi, on May 15, 2007, on the Babli Dam issue. Photo: S. Subramanium