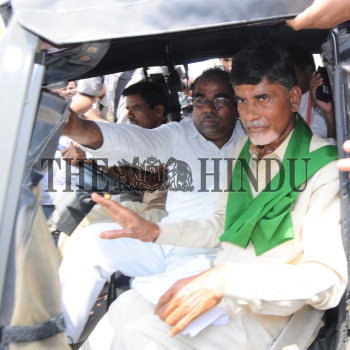 Caption : HYDERABAD, 19/05/2011: Telugu Desam Party President N. Chandrababu Naidu in police jeep after he was arrested for staging road-roko near Andhra Karnataka border about 200 km from Hyderabad as part of Maha-dharna program called by TDP to protest against State failure to give Minimum Support Price for Paddy famers on May 19, 2011. Photo: Mohammed Yousuf