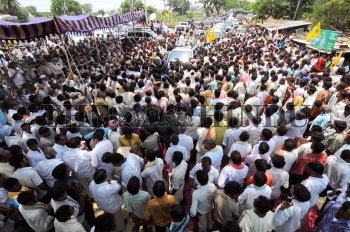 Caption : HYDERABAD, 19/05/2011:Telugu Desam Party President N.Chandrababu Naidu, address at a massive famers rally on the AndhraĐKarnataka border about 200 km from Hyderabad as part of Maha-dharna program called by TDP to protest against State failure to give Minimum Support Price for paddy famers on May 19, 2011 in Mahboobnagar district of Andhra Pradesh. Photo:Mohammed Yousuf