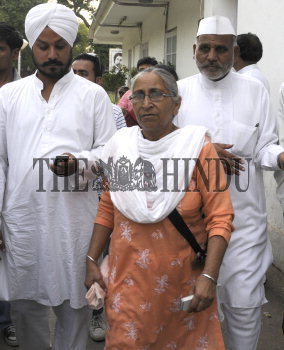 Caption : NEW DELHI,19/05/2011: Indian Prisoner Sarabjeet Singh's sister Dalbir Kaur seen during a protest outside the AICC Head Qaurter in New Delhi on 19, May, 2011 as part of an indefinate hunger strike urging the release of her brother who is facing the Death sentence in a Pakistani jail. Protesters demanded that Prime Minister Manmohan Singh and the Indian Government send a petition to Pakistani authorities requesting them to take immediate steps for the release of Sarabjit Singh, who has been languishing in a Pakistan jail for the last 21 years. Photo: S.Subramanium