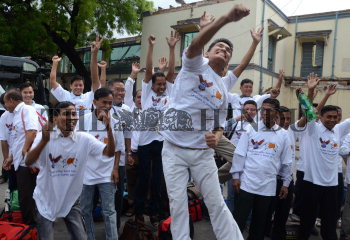 Caption : KOLKATA, 19/05/2011: Thirty-four Arakanese rebels from Myanmar walk free from Kolkata's Presidency Jail on May 19, 2011, after 13 years in captivity, six of them without trial in Andamans. These rebels were accused of charges of gunrunning by the Indian military , something that they steadfastly deny. They say they were used by the Indian military intelligence. But things apparently changed when India's relations with Myanmar's military rulers started improving . They have been given refugee status by UNHCR and allowed to stay in India but they may also get asylum in Czech Republic. Photo: Sushanta Patronobish