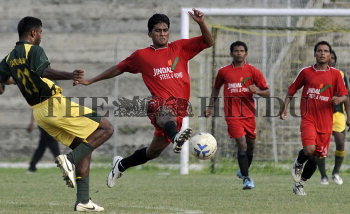 Caption : GUWAHATI, 19-05-2011: Wasim Raja of Chhattisgarh (second from left), who scored his team's third and final goal against Tamil Nadu, seen in action in the midfield during the quarterfinal match in the 65th Senior National football championship for the Santosh Trophy at the Nehru Stadium in Guwahati on May 19, 2011. Chhattisgarh won the match by 3-1. PHOTO: RITU_RAJ_KONWAR