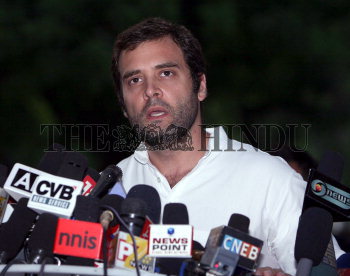 Caption : NEW DELHI, 16/05/2011: AICC General Secretary Rahul Gandhi gestures as he addresses media, after meeting the Prime Minister to highlight the situation of farmers in Greater Noida who claim their land is being illicitly acquired by Mayawati's Government in UP, in New Delhi on May 16, 2011. Photo:Shanker Chakravarty