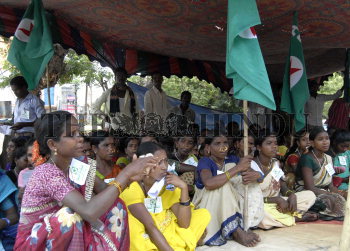 Caption : VISAKHAPATNAM,16-05-2011:A Girijan woman among the people from Dumbriguda mandal who staged a protest in front of Collectorate, Visakhapatnam on May 16, 2011, demanding Government not to allow china clay mining, and urge to withdraw GO on forming rehabilitation committees in bauxite mining area and withdrawal of cases against Girijans for protesting against china clay mining. Photo: C.V. Subrahmanyam