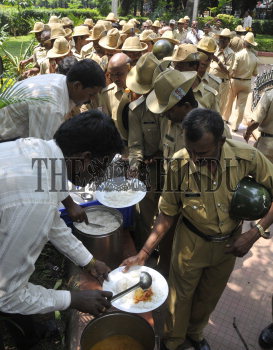 Caption : BANGALORE, 16/05/2011. Police given food after controling the BJP leaders and supporters protest against Governor HR.Bharadwaj's letter to the President of India to bring President rule in Karnataka in Bangalore on May 16, 2011. Photo:K.Bhagya Prakash