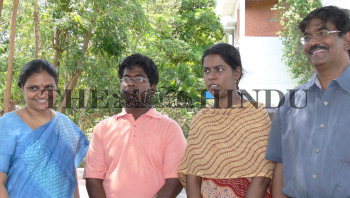 Caption : VELLORE, 14/05/2007: P. Vijayakumar of Shrishti MHSS, BRAMMAPURAM, Vellore (second from left) who obtained the first rank in Plus Two exams in Vellore district, M. Yazhmozhi of the same school (second from right) who obtained the second rank in the district posing along with a jubilant school correspondent T. Rajendran and Principal Anandi Rajendran in the school premises soon after the results were announced on May 14, 2007. Photo: D. Gopalakrishnan