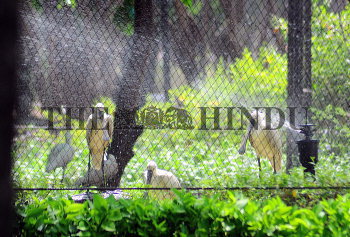 Caption : HYDERABAD: 15/05/2011. Birds drenching under uninterrupted cool shower in the enclosures which have been equipped with fogger apparatus releasing cool mist as the sun beats down mercilessly and state wilts under soaring day temperatures above 42 degrees, in the Nehru Zoological Park in Hyderabad. The zoo authorities have installed sprinklers for providing reprieve from heat for animals and birds in the captivity. Photo: Mohammed_Yousuf