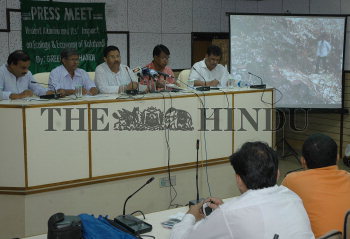 Caption : BHUBANESWAR, 14/05/2007: Leader of Congress (I), Bhakta Das flanked by Srikant Jena, Orissa Pradesh Congress Committee Chief, Jaydev Jena, and representatives from CPI (M), CPI is in a press conference in Bhubaneswar on May 14, 2007 to announce that jointly they will protest against Vedantaâs Alumina Refinery and proposed Niyamgiri Mining project. Photo: Ashoke Chakrabarty