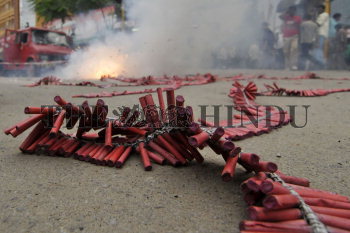 Caption : GUWAHATI, 13/05/2011: Congress supporters celebrating their victory with crackers in front of Congress head office after winning the Assam Assembly election as single largest party in Guwahati on May 13, 2011. Celebrations began in the Congress camp after a massive wins for the party for the third straight term in Assam. Photo: Ritu Raj Konwar