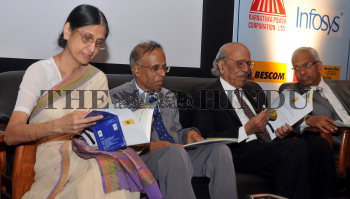 Caption : BANGALORE, 13/05/2011: ESVC-2011: (from left): Additional Chief Secretary of Department of Energy Shameem Banu, Advisor to Chief Minister A. Ravindra, former Under Seretary General, United Nations and Chairman of TERI, A. Ramachandran and Managing Director of Bhoruka Power and Chairman of CII S.Chandrasekar at the inauguration of ESVC-2011 Eenergy Symposium and Vendors Conclave by Centre for Sustainable Development and Intergrate Green Ventures at NIMHANS Convention Center in Bangalore on May 13, 2011. Photo:V.Sreenivasa Murthy