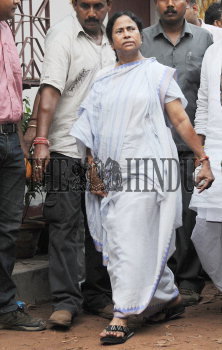 Caption : Kolkata: Chief of All India Trinamool Congress (AITC) Mamata Banerjee walking to her office from home at her residence at Kalighat in Kolkata on Wednesday. After completion of the election process many news channels and newspapers have predicted through exit poll, that Mamata Banerjee may receive a massive victory in the 15th Assembly Election in West Bengal. The counting of the poll is scheduled on May 13. Photo: Arunangsu Roy Chowdhury May 11, 2011.