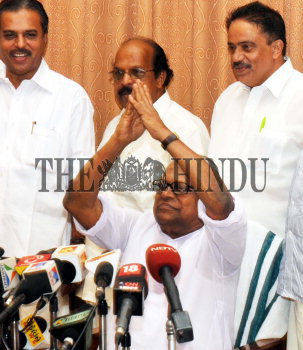 Caption : THIRUVANANTHAPURAM, 11/05/2011: Chief Minister V.S. Achuthanandan, with his palms joined together, expresses his gratitude to mediapersons for the "cooperation received from them" during the last five years of the Left Democratic Front government in Kerala after a press conference after the last meeting of his Cabinet on May 11, 2011. Some of his Cabinet colleagues are standing behind him. Photo: C. Ratheesh kumar