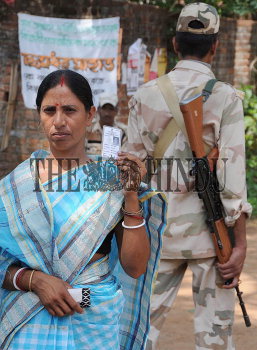 Caption : Kolkata: Niyati Mahato, wife of Chhatradhar Mahato, the PCPA convenor contesting as Independent candiate flashing voter ID card after casting the vote at Birkand in Paschim Medinipur district of West Bengal on Tuesday. The sixth and last phase of the 15th Assembly Election in West Bengal has been conducted in the entire Maoist infested zone, which has been spread over three district of West Bengal covered with security blanket to have free ande fare poll despite ther bandh call by the extreemist group. Photo: Arunangsu Roy Chowdhury May 10, 2011.