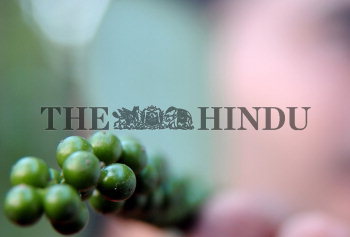 Caption : he growing stages of pepper as seen at a farm near Kochi in Kerala.The price of black pepper has reached a new high in the Country, thanks to scanty arrivals and a sharp decline in production. Pepper prices have touched a record high in 11 years and is expected to move higher in the coming days owing to rising demand and short supply, according to trading sources. According to the production forecast of the Directorate of Arecanut and Spices Development, pepper production in the State may decline to 23,322 tonnes this fiscal from 29,152 tonnes last fiscal. The directorate expects a 21.4 per cent decline in production in Idukki and a 17 per cent fall in Wayanad, two major pepper-growing districts in the State. Shortage in supply due to fall in Indian production and reluctance to sell by the Vietnamese farmers at the current prices has led to a squeeze in availability, creating a mismatch in demand and supply currently, pushing up the prices. Photo: K_K_Mustafah 10/05/2011.