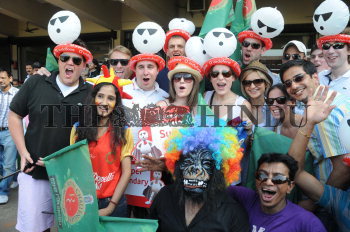 Caption : Bangalore: 08/05/2011. Attractive crowd during the IPL (Indian Premier League) 2011 twenty20 cricket match between Royal Challengers Bangalore and Kochi Tuskers Kerala at the Chinnaswamy Stadium in Bangalore on May 8, 2011. Photo:G_P_Sampath_Kumar