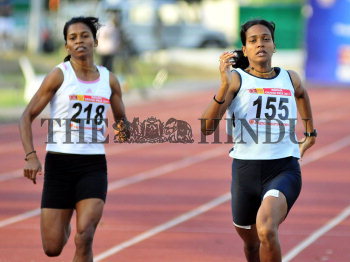 Caption : PATIALA 07-05-2011: K. Mrudula from Andhra Pradesh (right) was the fastest in women?s 400 metres race during the second Indian Grand Prix-2011 held at Netaji Subhash National Institute of Sports in Patiala on May 7, 2011. Photo: Akhilesh_Kumar