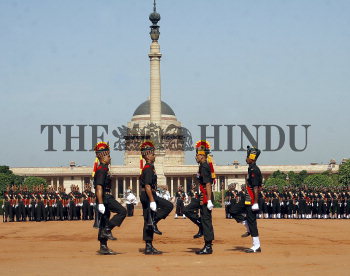 Caption : NEW DELHI, 07/05/2011: Bodyguards of the President march during the outgoing 15th Battalion of Jammu and Kashmir Rifles handing over the charge to the 28th Battalion of Madras Regiment during the Ceremonial Changing of the Guard Ceremony at Rashtrapati Bhavan, in New Delhi on May 07, 2011. Photo: Shiv Kumar Pushpakar