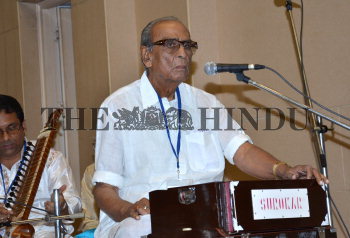 Caption : NEW DELHI, 07/05/2011:Bengali Rabindrasangeet singer and artist, Dwijen Mukherjee, during the commemoration of the 150th Birth Anniversary of Gurudev Rabindranath Tagore, in New Delhi on May 07, 2011. Photo: Shanker Chakravarty