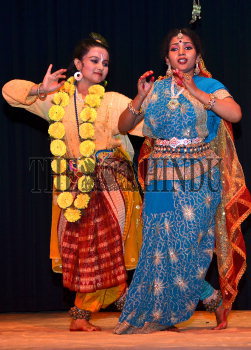 Caption : NEW DELHI, 06/05/2011: Dancers performing dance-drama "Bhanusingher Padabali" is one of the earliest works of Tagore, at the three days festival of 150th Birth Anniversary of Gurudev Rabindranath Tagore under the title of "TRIBUTE TO TAGORE" organised by Circle Theatre Company, in New Delhi on May 06, 2011. Photo: Shanker Chakravarty