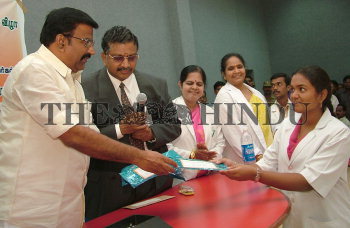 Caption : TIRUCHI, 13/05/2007: Transport Minister K.N.Nehru distributing educational assistance sanctioned from the Chief Minister's Relief Fund to a student of the K.A.P.Viswanatham Government Medical College at Tiruchi on May 13, 2007. The College Dean R.M.Natarajan (second from left) looks on. Photo: R.M. Rajarathinam