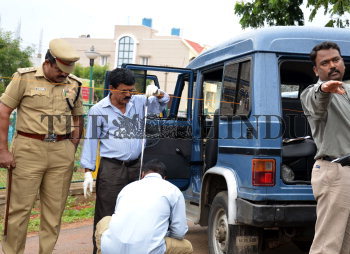 A NOTARIOUS ROWDY AKRAM SHOT DOWN BY CCB POLICE IN

Caption : BANGALORE, 04/05/2011:A notorious rowdy Akram shot down by City Crime Branch CCB Police in a Chase and gun firing in Bangalore on May 04, 2011, and firing tookout from both the side.Police and the rowdy sheeter at HMT layout near Peenya in Bangalore in which Akram had a head injury and taken to Hospital where he died, one of his assoiciate escaped. Forensic expert and Police Officials visited the spot and seized the arms and AMUNITIONS used by the Criminal. Photo: K. Gopinathan