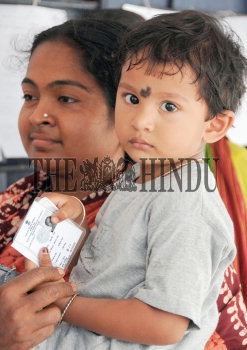 Caption : Kolkata:The young boy waits with his mother at a polling booth of Singur in Hooghly district on the fourth phase of the Assembly election in West Bengal on Tuesday. Farmers of Singur, who protested the allegedly forcibly acquired farmland for the Tata Motors ?wonder car? project and HALTED it are casting their votes here. Dissatisfaction at large has been observed over the political war, which could not see any solution for the farmers in last few years. A section of unwilling farmers still feel that the change may bring some extra benefits to them, but youths of these villages in Singur are clueless with a jobless tranquillity. The abandoned project site of Tata Motors haunts everyone and makes them sad as they dreamed a better future with the industrial development. Photo: Arunangsu Roy Chowdhury May 03, 2011.