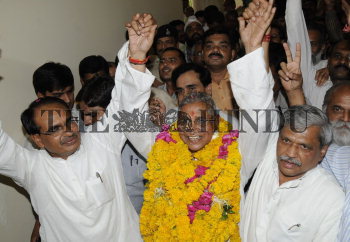 Caption : BHOPAL, 02/05/2011: Senior BJP leader Meghraj Jain being welcomed by Madhya Pradesh Chief Minister Shivraj Singh Chouhan (L) and State BJP President Prabhat Jha (R) after file his nomination paper for the Rajya Sabha by-election, at State Assembly in Bhopal on monday. The by-poll for the seat was necessitated due to the death of senior Congress leader, Arjun Singh. Photo:AM.Faruqui