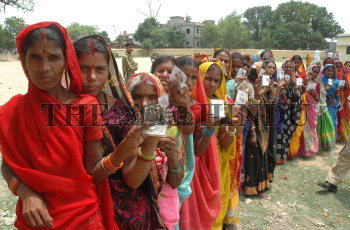 Caption : JAMUI, 30/04/2011:Women display their voter identity CARDS as they stand in a queue to cast their votes at a polling booth in Gidhaur block in Jamui district during fourth phase of Bihar Panchayat polls on April 30, 2011. Photo:Ranjeet Kumar