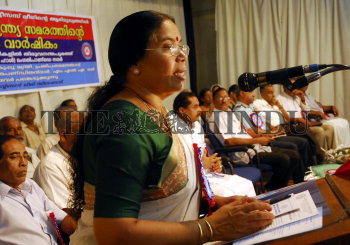 Caption : THIRUVANANTHAPURAM, 10/5/2007: Health Minister P.K.Sreemathy inaugurating the '150th Anniversary of First revolution for Independance of Motherland' organised by the Kerala State Ex-services league in Thiruvananthapuram on May 10, 2007. Photo: S. Mahinsha