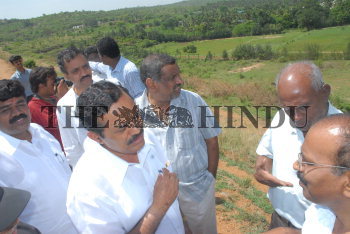 Caption : BANGALORE,10/05/2007: A.T. Ramaswamy, chairman of the Joint Legislature Committee formed to look into encroachment of government land in and around Bangalore, committee members and officials at B.M. Kaval in Bangalore on May 10, 2007, where 162 acres of land is suspected to have been encroached upon. Photo: K. Gopinathan 10/05/2007