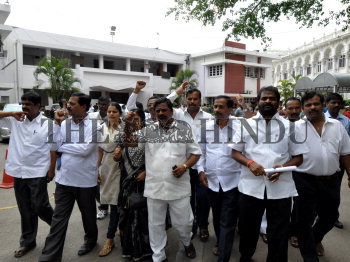 Caption : HYDERABAD, 21/04/2011:Irate leaders of Joint Action Committee of Telangana Employees, Teachers, Gazetted officers and Workers led by TNGO's Central Union president K.Swamy Goud shouting shogans after they were pushed out of Congress Legislature Party Office at Andhra Pradesh Legislative Assembly in Hyderabad on April 21, 2011. The leaders had wanted to invite the legislators for round table meeting on GO 177. Photo:Mohammed Yousuf