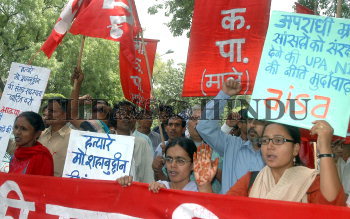 Caption : NEW DELHI: 09/05/2007: Activists of Communist Party of India (ML) Delhi, staging a demonstration at Jantar Mantar in New Delhi, on May 09, 2007, demanding expulsion of RJD MP Shahabuddin from the Parliament, following the Court judgement sentencing him life imprisonment for abduction and murder of CPI (ML) supporter Chhottelal Gupta in 1999. Photo: Anu Pushkarna