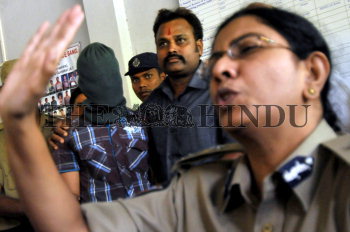 Caption : HYDERABAD, 18/04/2011: Additional Commissioner of Police (Co-ordination) A.R. Anuradha interacts with the media while producing accused who was arrested in connection with raping a 18-year-old girl in his car at Narayanaguda area, during news conference held at Abids police station in Hyderabad on Aprl 18, 2011. Photo:Mohammed Yousuf