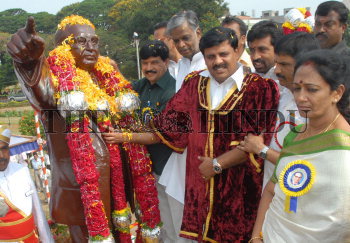 Caption : MYSORE, 14/04/2011: The Minister for Medical Education and Mysore district in charge Minister S.A. Ramdas garlanded the statue of Dr. B. R. Ambedkar on the ocassion of the 120th birth anniversary of the architect of the Indian Constitution. The Mayor Sandesh Swamy, Nanjangud MLA V. Srinivas Prasad, and Mysore ZP President Sunitha Veerappagowda are present. Photo: M. A. Sriram