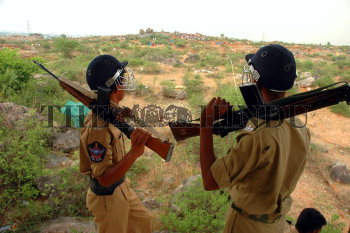 Caption : HYDERABAD, 07/05/2007: Battle against Poverty and Land Struggle: Police jawans on a watch as they stand on top of multi-storied private building even as hundreds of poor people under the aegis of Communist party of India (Marxist) seized government land on the the Nagole hillock on the second day in the outskirts of Hyderabad demanding house sites (pattas). Photo: Mohammed Yousuf