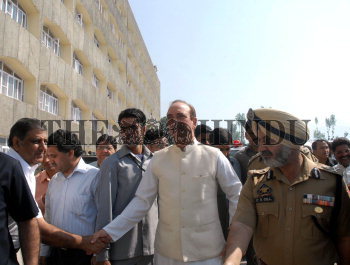 Caption : SRINAGAR, 07/05/2007: Jammu and Kashmir Chief Minister Ghulam Nabi Azad (second right) inspecting the Guard of Honour, outside the Civil Secretariat complex, on the first day of the 'Darbar Move', in Srinagar, on May 07, 2007. The Civil Secretariat, which houses the Office of the Chief Minister and his colleagues, reopened in Srinagar, the summer capital of Kashmir, after a gap of six months from Jammu, the winter capital. The Darbar Move is the age-old tradition of shifting the Civil Secretariat and other Government offices to Jammu during the winter months and re-opening in Srinagar in summer. Photo: Nissar Ahmad