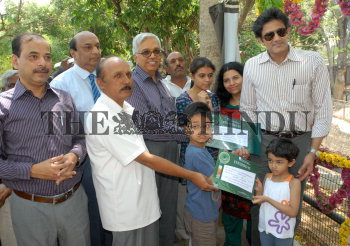 Caption : MYSORE, 11/04/2011: Asiatic lions, Gowri and Shankar, languishing at the Mysore Zoo. Their enclosure was opened for public view on April 11, 2011 by renowned cricketer Anil Kumble. The adoption certificate was received by his children from the Chairman of the Zoo Authority of Karnataka, M. Nanjundaswamy. Photo: M. A. Sriram