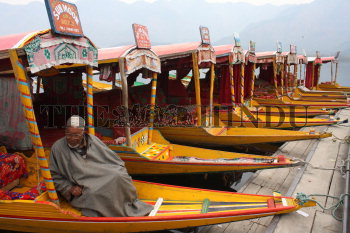 Caption : SRINAGAR, 09/04/2011: A boatman wait for customers during strike aganist the killing of Islamic cleric Moulana Showkat Shah in srinagar on April 09, 2011. Normal life was in Jammu and Kashmir as the separatists called a protest against the killing of Islamic cleric Maulana Showkat Ahmad Shah. Both the moderate and the hardline groups of the Hurriyat conference led by Mirwaiz Umer Farooq and Syed Ali Geelani, and the pro-freedom Jammu and Kashmir Liberation Front (JKLF) led by Muhammad Yasin Malik had called the protest against the murder of the Islamic cleric.While the Hurriyat groups have called for a day's strike, the JKLF has called for a two-day strike. Markets, educational institutions and business establishments remained closed in Srinagar while poor attendance in Government offices, banks and post offices. Photo:Nissar Ahmad