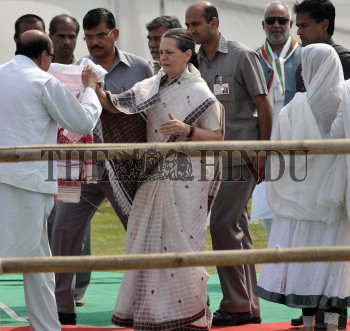 Caption : GUWAHATI, 08-04-2011: All India Congress Committee (AICC) President Sonia Gandhi is being welcomed by Congress leaders as she arrived to address an election rally in Guwahati on April 08, 2011. Sonia Gandhi is campaigning for the second phase of Assam Assembly election which is scheduled to be held on April 11, 2011. Photo: Ritu Raj Konwar