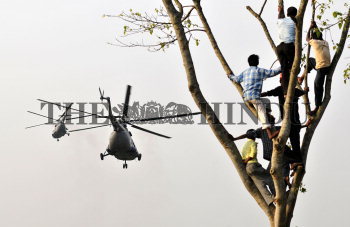 Caption : SIPAJHAR, 07-04-2011: (PM ADDRESSED ELECTION RALLY IN ASSAM FOR SECOND PHASE OF ASSEMBLY ELECTION) Children enjoying watching MI 17 helicopters from tree top which carrying Prime Minister of India Manmohan Singh during an election rally in Sipajhar Assembly constituency in Darang district of Assam about 60km away from Guwahati on April 7, 2011. Prime Minister is campaigning for the second phase of Assam Assembly election which is scheduled to be held on April 11, 2011. Photo:Ritu Raj Konwar