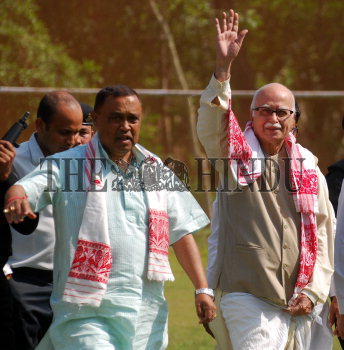 Caption : KAMALPUR, 06/04/2011: ELECTION SPECIAL: Senior BJP Leader L K Advani along with BJP?s Assam state President Ranjit Dutta (L) waves to the BJP supporters during an ELECTION rally in Kamalpur constituency Kamrup district of Assam about 60 km away from Guwahati on April 06, 2011. Advani is campaigning for the second phase of Assam Assembly ELECTION which is scheduled to be held on April 11, 2011. Photo: Ritu Raj Konwar