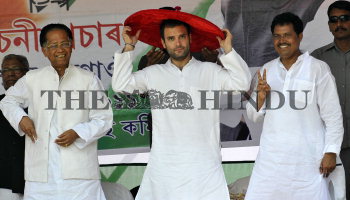 Caption : GUWAHATI, 05-04-2011: AICC General Secretary Rahul Gandhi is being welcomed by a traditional Assamese ?Japi? by the Congress candidate Rekibuddin Ahmed (R) in presence of Assam Chief Minister Tarun Gogoi during an election rally in Chaygaon Constituency in the out skirts of Guwahati on April 05, 2011. Rahul Gandhi is campaigning for the second phase of Assam Assembly election which is scheduled to be held on April 11, 2011. Photo: Ritu Raj Konwar