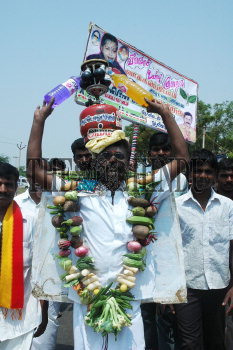 Caption : MADURAI, 04/04/2011: FOR ELECTION 2011: SYMBOLISING PRICE RISE: AIADMK cadre with a garland made out of vegetables and a small gas CYLINDER cooking stove symbolising the price rise of essential commodities during AIADMK General Secretary Jayalalithaa's campaign at Andipatti on April 04, 2011. Photo: G. Moorthy